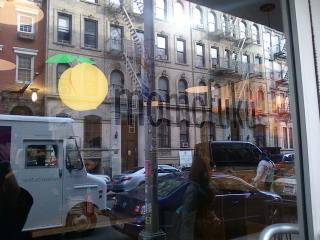 The Momofuku is a Japanese restaurant group that has other outlets like Momofuku Noodle Bar, Ssam Bar, Milk Bar and more. Momofuku means lucky peach. The Milk Bar, the bakery, was the one that I visited. It offers cakes, cookies, ice cream, pies and more, including some savory foods. Their style is kind of rustic, yet sophisticated. They deal with comfort foods, but present them in a new, or different way, and making the food taste good is important to them. The ice creams they serve are flavors like cereal milk, candy bar pie, and grasshopper pie. Their ice cream flavors derive from some of there pies, like the candy bar pie, grasshopper pie, and the crack pie. Their cookies are not the type of cookie you would find in a normal bakery, they have the compost cookies, the corn cookie, and the cornflake-marshmallow chocolate chip cookies. I am really interested in their cakes, and I would not mind having there cake as my wedding cake one day. It is a cake, without the buttercream on the outside, you can see every layer of the cake from the outside.

This is one of their wedding cakes, it is a pretzel cake with a beer ganache. Sounds awwwwesome! It's also very unique, but still pretty to look at. They also make cake truffles, which are basically cake balls. 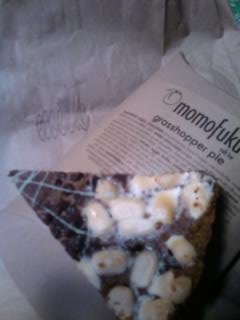 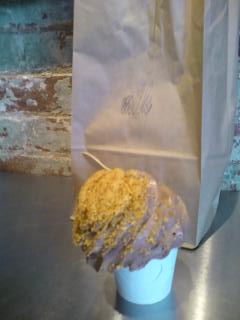 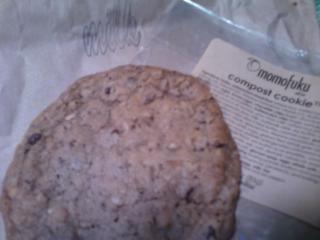 When I visited the milk bar I knew right away what I wanted to have, I knew I'd need an ice cream, a piece of the grasshopper pie, and the compost cookie. I chose the candy bar pie ice cream, it has the flavors of the candy bar pie, peanut butter nougat, pretzels and chocolate crust.  The ice cream was extremely rich, and very sweet, my friend Alisa, from Japan, isn't as accustom to sweet food like Americas, so to her it was extremely sweet. I wasn't able to finish it, because it was so rich, but it was really good. I could taste the different flavors in every bite, and the textures made it fun. It was smooth and creamy, but also crispy and crunchy from the Graham cracker crumbs on the outside, as well as the chocolate crust pieces on the inside. The compost cookie has a ton of ingredients listed on the package, but the main ingredients are pretzels, potato chips, coffee, oats, butterscotch, chocolate chips. It sounds like it could be disgusting, but they probably wouldn't sell it if it was. I love it, it also had varying textures from the coffee to the potato chips. The combination of flavors worked so well together and it was worth the price. Now for the pie; I love the original grasshopper pie, so I was really excited to see that they had it on their menu. Their version is slightly different from the original version. It is more of a chocolate mint cheesecake with the marshmallows on top rather than mixed inside. The pie was also extremely rich; I split it with Neil, but probably could have eaten it all alone, since it was a pretty small piece. The cookie cost 1.85, the ice cream was 4.50 and the pie was 5.25.  The prices were pretty good for the quality of the food. I was upset about the price of the ice cream, but once I realized I would not be able to finish it I realized it was worth it, a little goes a long way. I forgot to mention how awful the service was. A woman asked a question, which pie was better, and they looked at her like she was a moron for asking them that question, their answer was that they were both good. When my friend ordered they acted as if she was interrupting their conversation. When I ordered they gave me a piece of the pie and said it was my friends, although she had already gotten one, they did not notice that they served her already, even though they only had 3 customers when this happened. I gave it back, but I should have kept it! 7.5 out of 10, service was bad, and prices were decent, and food was pretty good, just a little too sweet and rich.
Posted by Chloe Labbe-Thibouthot at 6:28 PM